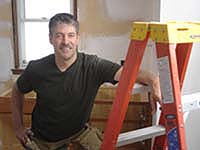 Paul is a regular and reliable source in newspapers, magazines and on-line for home improvement issues and solutions.

Check out these links for articles:

The leaves aren’t the only things falling these days—the temperature is dropping too, which means it’s time to get your house in order and ready for winter… MORE

“To avoid the chill, search your home for holes to fill”
By Jeanne Mooney
The Virginian-Pilot
© November 28, 2007

Paul Ryan was a speech communications and broadcasting major in college, but his real passion was in carpentry. He’s found a way to do both. MORE…

What You Need for Home Improvement
RoadKing Magazine
October, 2005

Looking to stock your toolbox? Paul Ryan, host of the DIY Network’s “Weekend Handyman” and “Kitchen Renovation,” offers his recommendations for home maintenance must-haves – and some nifty gadgets for more ambitious projects. Still, he says with a laugh, “I always say the best tool you can have for a job is plenty of patience!” MORE…

The members of the ARA Advertising and Marketing Committee are making good on their plan to develop a national consumer-media campaign targeting the ever-growing home-improvement market. MORE…

Hub of the Home is for Entertaining as Well as Cooking
The Pittsburgh Tribune Review
Saturday, March 26, 2005
by William Loeffler

Today’s kitchens seem to have everything except beds. “People are spending more time in kitchens,” says Paul Ryan, host of “Kitchen Renovations,” which airs at 10 p.m. Wednesdays on the DIY Network. “Kitchens years ago used to be white walls and three appliances and a counter.” MORE…

My Back Yard is Under Water!

In October of 2003, Edelman Productions filmed a television show demonstrating a solution to a back yard drainage problem. The show was filmed for the Do it Yourself (DIY) network as part of the Weekend Handyman series.

In the series, host Paul Ryan and his able assistant Beth, demonstrate to viewers how to carry out common household repairs and improvements that can be carried out by homeowners in a weekend project. The scene of this project was a charming back yard that had plenty of slope, but rain water was getting trapped in flat areas. Of special concern was a corner where water accumulated due to run-off from the roof and driveway with nowhere to escape. MORE…