Paul Ryan has been in the construction industry since his teens. He began his career as a Carpenter-Inspector at Valleyfair Amusement park in Shakopee, Minnesota. Because the park was basically a small city, all aspects of home improvement were needed. Paul built everything from rides to structures. Paul was a Lead Carpenter, which meant he was often sent to locations to troubleshoot problems and determine what needed to be done to fix the problem. In addition to carpentry, he is experienced in plumbing, fiberglass repair and other aspects of construction.

Paul is a carpenter who happened to end up on TV. In the early 1990’s, a company needed someone to host a video project who could talk about tools while using them. Paul was the perfect fit. Since that video, Paul has hosted four different television series: 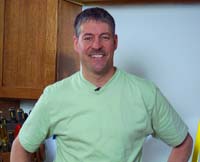